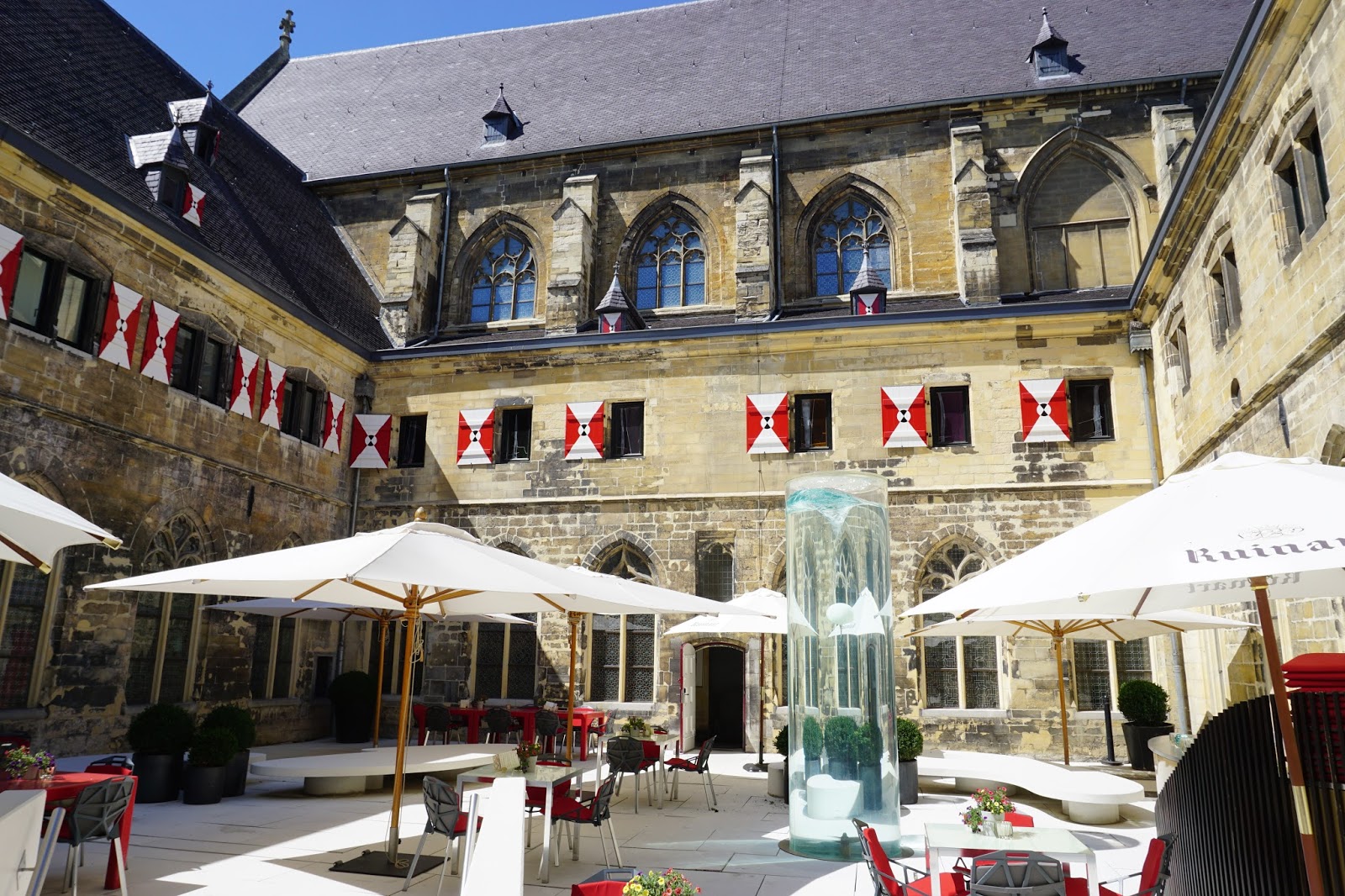 If any hotel stay was the epitome of a five-star European experience, it was my 3 nights at the Kruisherenhotel in Maastricht.

What was once a 15th century monastery is now an amazing design hotel. And if you think the building looks good, you should try out their wine collection!

I do believe that this is the first five star hotel that I have ever stayed in, so bear with me if I become a little over-enthusiastic. I had said in my previous post about Maastricht that there was an impressive wealth of religious buildings, some which had been converted to new uses such as bookstores. This hotel is a perfect example of old meeting modern. The designer, Camille Oostwegel, has done a grand job converting a 15th century monastery into a five star Design hotel experience.

What we get here is a medieval shell, with a sleek and modern installation.

Everything in the building is a wonder. You’re either immensely impressed by the traditional wonder of the building or the beautiful interiors which both blend in and stand out against the backdrop. I spent hours in the lobby area just drinking wine and reading a book and spotted so much in the way of interesting installations.

Like the case with the bookstore in the previous post, the central modern extension of the building, where the restaurant is, doesn’t touch any of the walls, giving a 360 view of the building’s shell.

This is basically my Sunday 🍾☀️ #travelblogger #maastricht

The courtyard was a stunning suntrap, and in the summer month it is a quiet and super luxurious place to get a glass of wine and escape the hustle and bustle of Maastricht city centre, which the hotel is located in the very centre of.

Kruisherenhotel is wonderfully situated. Only a 10Euro taxi ride from the train station, the hotel connects to the most popular square of the Vrijthof by a short street which is quite literally a couple of minutes walk. From there is an abundance of eateries, shops and attractions, and I could not think of a better placed hotel.

In terms of eating at the hotel I would recommend it for one meal, just to try, as the quality of the food is superb and a three course meal for 45Euro is a reasonable given the quality, however there are only two choices on the menu!

Good luck escaping the bar however, as they have a fantastic selection of alcoholic and non-alcoholic drinks, and their choice of white wine was amazing. I can’t remember which ones I sampled, obviously, but they were divine.

I will be reviewing my room based on the fact that rooms start from 244euros per night. Without a doubt that is pricey, and even though I felt like the entire experience was worth that amount, the room that I had left much to be desired.

From the photos that I have seen of more expensive rooms, there is definitely some five star luxury to be had if you are willing to pay above the base rate, but for the room that we got I was expecting something a little more…

In comparison to the rest of the building I expected the rooms to be a little more…unique. But still, they were comfy, quiet, and had everything that we could need!

So was I impressed by my first five star experience? Absolutely!

Would I recommend the Kruisherenhotel? If you’re looking for something unique and right in the heart of Maastricht, yes I would – but expect to pay out for it too!

I would be incredibly honored if you nominated my in the Bloggers Blog Awards in the Travel category. In the top of my sidebar to the right you will find the link to the nomination form. If you do, thank you so much. Love, Ness x

Thoughts on my Masters Degree